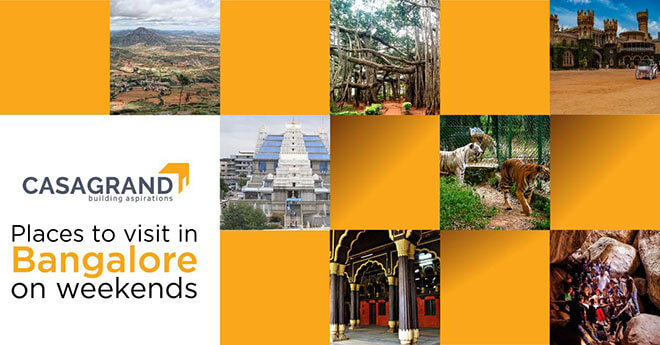 India’s IT Capital, India’s Silicon Valley and Garden City – Bangalore goes by many names. The city is a bustling cosmopolis with foreign influence seamlessly woven around its rich culture and heritage. Bangalore today, is a rightly called a melting pot of culture and a tourist destination that attracts peoples of all ages and interests. […]

Places to visit in Bangalore on weekends

India’s IT Capital, India’s Silicon Valley and Garden City – Bangalore goes by many names. The city is a bustling cosmopolis with foreign influence seamlessly woven around its rich culture and heritage. Bangalore today, is a rightly called a melting pot of culture and a tourist destination that attracts peoples of all ages and interests. Whether you’re looking for history, adventure, nightlife, nature or luxury – Bangalore has it all. If you’re looking to spend some time in this vibrant city, here’s a list of must-see places in and around Bangalore that reflect the city’s diverse culture.

Nandi Hills or Nandidurg is a popular weekend destination near Bangalore located on the Chikkaballapur Road. It is a favourite among Bangaloreans for early morning drives to catch the sunrise, trek or just simply to get away from the hustle and bustle of the city. This picturesque location features misty mountains and pleasant weather. Nandi Hills gets its name from the large Nandi statue at the gate of the Yoganandeeshwara Temple atop the hills. Nandi Hills is easily accessible by road and is only 62km from the city centre.

For those looking to get closer to nature, Chunchi Falls is the place to go. Located around 90km from Bangalore, Chunchi is a feet waterfall with multiple tiers that fall to form a swimming pool at the bottom. The route to Chunchi falls is packed with lush greenery and gorgeous scenery. Nature lovers and photographers will be enchanted by the waterfall and its surroundings. The rocky terrain is a worthwhile challenge for trekking enthusiasts. Chunchi Falls is a great picnic spot, tucked away from the commercialisation and somewhere you can relax with your family and friends.

The Majestic Bangalore Palace has been commanding attention since its construction in 1878. This erstwhile royal residence is the epitome of beauty and sublime architecture. It was built by King Chamarajendra Wadiyar and is a mixture of Tudor and Scottish Gothic architecture. The king was believed to have been inspired by the Windsor Castle of London. Although it is one of Bangalore’s central attractions, the palace also plays host to several cultural events, concerts and marriages, etc. The palace sprawls across a massive 45,000 sq ft of land. It is located in Bangalore’s Vasanth Nagar and exudes to its visitors a feel of old world opulence and charm.

Antharagange is a series of small hills located 68km outside of Bangalore. This beautiful hill range is strewn with natural caves formed out of volcanic rocks and boulders. One of Bangalore’s most popular tourist destinations, Anthargange hills is the perfect place for those who love trekking, rock climbing and spelunking.

Located just 22km from Bangalore’s centre, Bannerghatta National Park is home to India’s first butterfly park. The Bannerghatta National Park is spread across 104.27 sq. km and houses a massive variety of flora and fauna, both indigenous and exotic. The park is popular with both kids and adults as it doubles as both a natural retreat and offers adventure sports like trekking, hiking, etc.

The Ramanagara range was popularly portrayed as Ramgarh, Gabbar Sigh’s hideout in Sholay. These hills located 55km outside of Bangalore are dotted with huge rocks and boulders. They provide an excellent terrain for reeking, high rope traversing, rappelling, etc.

One of Bangalore’s best-kept secrets is the Ramanagara wine tour. Nestled away in the tiny town, you can taste some authentic wine and dine at the in-house restaurant amidst the sprawling vineyards and scenic landscapes.

Big Banyan Tree or Dodda Alada Mara in Kannada isn’t just your average banyan tree. It is 400 years old and is the fourth biggest banyan tree in the world. If you’d like to take a look at this natural wonder, head out to the Bangalore-Mysore highway. It is located near Kengeri at a distance of 28 km from Bangalore centre. According to Indian mythology, a banyan tree is revered as a symbol of fertility because of its enormous canopy and multitude of roots. Being among the largest banyan trees in the world, the Dodda Alada Mara is a vision of greenery. Visit this serene location to clear your mind and spend a relaxing day under the cool shade of its branches.

This extensive list only scratches the surface of what Bangalore has to offer. Apart from being a popular tourist and holiday destination, Bangalore also attracts a lot of attention due to its booming real estate market. Here are some of the best places to invest in Bangalore.